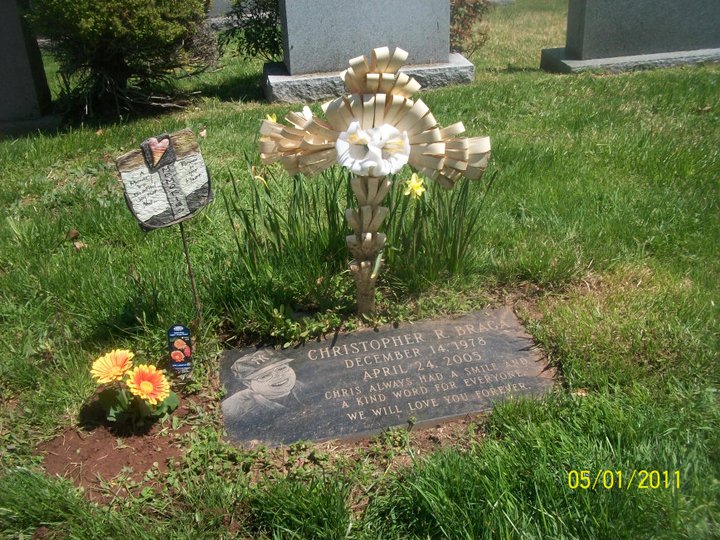 I am so blessed to have shared almost 27 years with my brother Chris. As a young child, Chris was mischievous, getting into lots of trouble. Burning his butt on the coal stove, climbing on top of the refrigerator to get to the cookie jar (which he always reminded us had raisins in it!), and being found outside alone by a neighbor at 6 am (which is when my mom started using the dead bolt)!

When Chris was 4, he started having headaches and shortly after was diagnosed with a brain tumor, a complication of the neurofibromatosis he had been diagnosed with a few years earlier.  He had brain surgery a few months after his 5th birthday. Recovery was slow but his spirits were bright. After his surgery, he had to have radiation as well and during one of his visits to the radiation treatment center, he was heard telling the other patients, “It’s easy. All you have to do is get sick and you get lots of presents.”

Throughout his 27 years, Chris fought many battles. He had many more surgeries, each of which took a toll on his body and took a bit of independence from him. Throughout this though, his attitude was positive. He always had compassion for others and started clubs at his school for various causes, including saving endangered animals and the environment. He started a collection of tabs from soda cans for the Ronald McDonald House.  He also started collecting and recycling cans and bottles.  While my mom shopped, he would put the bottles in the machine and they would donate the money to people in need.

Chris loved baseball and had the opportunity to play baseball and bowl with a wonderful community of people. They became a second family to me, the Challenger League. There, he and others with disabilities were given the opportunity to be ‘normal’ kids. I spent many Sunday mornings on the baseball field or at the bowling alley with these kids and their families. Many of them, like Chris, were inspiring. Seeing their smiles in the midst of the struggles they faced helped me to put my problems in perspective.  And seeing them show compassion to others and each other inspired me to do the same.

Chris is missed by many because his life touched so many people. Today marks 10 years since he passed away, and it doesn’t quite seems real. It’s hard for me to know that my oldest daughter barely remembers him and my younger two were never able to meet him. I know he would have loved them and they would have loved him.

I am glad that my oldest daughter inherited some of his friendly and outgoing nature. She, like Chris, has a way of connecting with people and talking to anyone.  And my middle daughter has been studying Earth Day in Kindergarten this year so I’ve been sharing with her how Chris loved to protect the environment. And having my two youngest with a similar age difference to Chris and I reminds me of my childhood (with my baby sister being played by the role of my oldest). I remember playing superheroes, crossbows and catapults, and many other games.  I remember bossing him around (I was the oldest after all) and I remember him getting frustrated and calling me made up words instead of saying a bad word. I miss his smile and him asking to have his back rubbed. I wish that my kids had him in their lives and were able to bless him with their smiles. I am thankful though to have had the time that I was given with him as I know it has blessed me immensely to have been given the blessing of him in my life.

Follow Beauty in the Brokenness on WordPress.com
Join 274 other subscribers