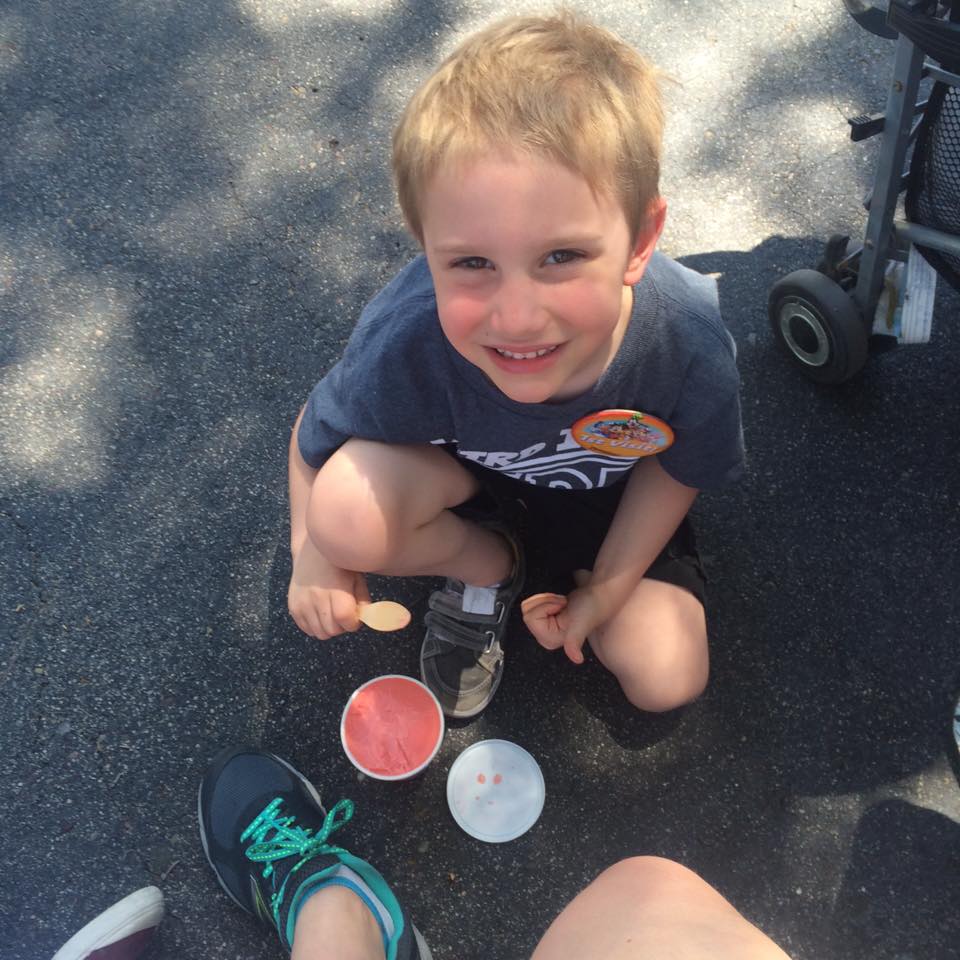 In the distance, sounds of a little boy, no more than 5, begging his parents to climb up the treehouse filled the air. “After Splash Mountain”, they replied and he relented. An hour later, they approached again and headed up the stairwell leading to the play area. As he got to the rope bridge, he became afraid and his mother carried him across and they continued on. He ascended slowly but as they reached the second highest level – the point where they would begin the trek down through the play area – he stopped. “No – I’m scared,” he declared. His mom and dad encouraged him, saying “you are almost to the top.” But he persisted and became more agitated as the seconds went by so his dad continued on with his sisters while his mom stayed with him. She attempted to pick him up to carry him but he insisted on going down himself, sitting down on his bottom and clutching the ground with all of his body as if he thought it would ensure his safety. As they descended the long windy stairway, they ran into groups of people and his mom tried to get him to let her carry him, but each time, he became more upset, insisting that he needed the stay firmly on the ground. And so people squeezed by them as he climbed – no crawled – down the stairs.  When they made it back to the rope bridge he let his mom carry him but insisted on being put back down the instant they were on more solid ground so he could continue his slow crawl down. When they finally reached the bottom, his mom was relieved and tried to pick him up to comfort him. But instead of feeling relieved to be at the bottom, his body was still pumping adrenaline, causing him to lash out at her. He ran towards her swinging his arms at her and screaming get away. It was crowded at the bottom and he began to run away from her through the crowds yelling, “GET AWAY FROM ME.” She tried to remain patient but was quickly becoming overwhelmed, embarrassed and uncertain as to what to do. Certainly people must be thinking, “Save this little boy from the woman who is trying to kidnap him.”  Or maybe, “That mom needs to learn to discipline her child.” Either way, she couldn’t get him to calm down so she chased him at a distance as he ran through the crowd.  When she’d inch closer, he’d turn and swing at her, and then they’d start the whole cycle again. As they approached a frozen lemonade stand, she pleaded, “Do you want some ice cream or lemonade?” but he just persisted in his hitting, screaming, and running away from her. They ended up by a fence facing the water, a short distance from the lemonade stand and he was finally able to calm himself down enough to realize that yes, some frozen lemonade would be nice. And so, they headed to the lemonade stand where she bought him a frozen lemonade, sat down, and were finally able to enjoy being safely on the ground again. This seemed like a familiar dance for the mom and boy, one that he led and she couldn’t seem to predict or gain control over.

As I reflect on this story, it makes me wonder how often I may take the role of this little boy as my heavenly father tries to coax me along. Instead of allowing him to carry me safely in the midst of my fear, I cling to the things that feel safe and miss out on both the experience of the playground – and the comfort He so desperately wants to give me. I pray that as I go along this next week, I can be more fully trust Him in the midst of my fear and that I would surrender myself to His comfort in times when I need it.

Follow Beauty in the Brokenness on WordPress.com
Join 270 other followers